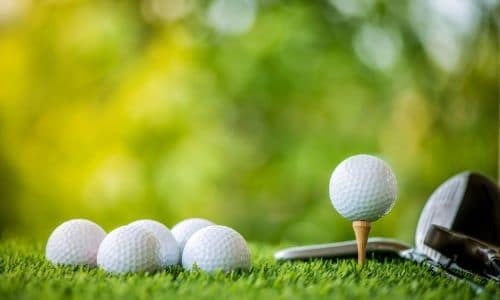 If you’ve ever paid attention while packing up golfing equipment, you’ll notice that all of the golf balls had numbers on them as if someone may want to keep track of them.

It seems weird, right? Does anyone actually inventory their golf balls?

So, why do golf balls have numbers on them?

Golf balls have numbers on them to help golfers identify their balls when they are playing against other players.

When there were only a few different golf ball brands, the balls weren’t numbered, and golfers usually had a hard time trying to figure out which ball was theirs.

Most golf balls look alike unless they are different colors or brands. The numbers are a unique identifier.

There are hundreds of different golf balls out in the world now, but there are only about a dozen or so golf balls that are deemed the most popular.

So, if two or more golfers have the same brand, it may be a problem, but generally, the number system works well.

We’ll talk about what those numbers mean, how golf balls are made, and what goes into their production.

What Do The Numbers on Golf Balls Mean?

Maybe you’ve been golfing for years, and you’ve never noticed those numbers.

Or, more likely, you’ve noticed them but didn’t give their meaning much thought.

As it turns out, golf balls actually can have up to three different numbers on them, and each of these numbers means something different.

The single-digit identification number that I mentioned before are generally found on every golf ball.

This number is usually printed under the company name on the ball. The most commonly used numbers for the identification marker are either 1, 2, 3, or 4.

Though these are the most common numbers, golf balls can have anything from zero to 9 printed on them, and, in some special cases, golfers will customize their balls with a lucky number that may be two digits.

When you buy golf balls in a sleeve, they will all have the same number, and the number will be the same color. On some golf balls, this identification number may appear as either black or red.

Once upon a time, golf rumors said that the red number on the golf ball was used to indicate that the ball was made with lower compression.

That was later proven to not be true since there are separate numbers to indicate the compression level.

The second number that may be found on a golf ball is the compression rating.

While compression rating is not as big of a deal in golfing now as it used to be, some companies still print the number on the ball.

Before solid-core golf balls came on to the market and made the traditional wound ball obsolete in the late 1990s, compression was very important to golfers.

These lower-rated golf balls were considered best for beginners, novices, or women players because the balls had been lighter, which made distance hits easier for those who wanted to clear the courses faster.

Other than the slight sexism deeming these as women golf balls, I understand why these would be preferable to beginners.

Usually capping off at around 110. These balls were used by more experienced golfers because the compression made it harder for the golfer to get distance on the ball.

However, the higher compression balls offered better control on small strokes as long as the golfer knew how to handle the weight.

Once manufacturers switched to solid-core golf balls, compression ratings dropped in general because different levels of compression were not as important to the game.

Why Are Compression Ratings Uncommon Now?

The reason these compression ratings are not commonly seen on balls anymore is kind of a weird story.

Certain manufacturers feared that the “manlier” golfers would see the low compression numbers and refuse to buy the golf balls because they only saw them as “ladies golf balls.”

If your golf ball has three digits, you already know what the first and second numbers will be.

The last number that you may find on your golf ball is the number of dimples on the ball. This number is usually in the 300s or 400s.

This number is not very common because it is not something that golfers tend to care too much about.

The reason many golfers tend to ignore these 3-digit number on their golf balls is that the number of dimples does not really affect how well or how high the golf ball will fly.

What is important about the dimples are their shape, diameter, and general design. Those elements tend to affect how well the golf ball will perform, but the number of dimples is not important.

Why Do Golf Balls Have Dimples in Them?

Though the number of dimples on the golf ball does not affect airtime or gameplay much, the dimples themselves are quite important.

Originally, all golf balls were made similar to ping pong balls with a smooth surface and generally hollow core, depending on compression.

These balls would get beaten up easily, and experienced golfers started to notice that the beat-up golf balls would fly for longer distances.

Soon enough, every golfer was playing with older golf balls, which had better lift,  which meant they were buying fewer balls.

The nicks and bumps—and eventually the dimples added—act as turbulators.

Turbulators are used to induce turbulence in the layers of air around the ball, often called the boundary layer.

In short, dimples should contribute to reducing drag.

There are turbulators on certain golf clubs, too.

The idea behind any of these dings and cuts on the balls and the lines and angled ridges on clubs are all created to help improve airflow and maximize the ability of the ball to soar through the air.

Dimples on the ball allow for optimized lift and reduced drag.

As you can see, there are reasons to what a golf ball looks like, from the numbers printed on it to the small indentation all around it.

Both of these characteristics are meant to help the golfer.

The numbers make the balls easier to identify and the dimples are an innovation meant to help increase the ball’s aerodynamics.