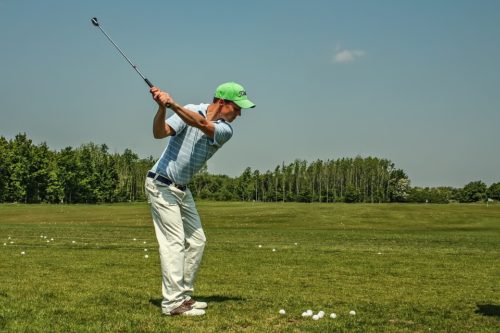 So you have started to “push” the golf ball out on the course. Don’t worry! I’ll have you cured in 2 mins!

To fix your push shot you have to make sure that your clubface and swing path are going more down your target line.

I know this sounds easier said than done but I promise that after you read my 5 steps, you will stop pushing the golf ball and hit longer, straighter shots!

What is a Push Shot?

A push shot sometimes called a blocked shot, is when you make contact with the ball coming from inside of your target line with an open clubface of the same degree.

For example, if you come from the inside of your target line at 3 degrees, your clubface would have to be 3 degrees open for your ball to be considered “pushed.”

A push for a right-handed golfer starts off to the right of their target and stays on that same line (opposite for lefties).

Curing the push shot is far easier than fixing sliced or the hook shots.

The slice and hook shots come from the unnecessary spin put on the golf ball from a swing path coming severely from the outside or inside of the target line.

Tip: Check out my two articles below if you want to learn how to fix your swing:

How To Fix a Push in Golf? 5 Step Guide

Let’s take a look at this little bit closer.

To prevent an open clubface, you have to release the face faster an impact.

Grab a club and make practice swings feeling like the toe of the club is going to head the ball first.

This motion is how you release (close) the clubface at a faster rate and make square contact!

You can also turn your top hand more towards the center of the grip, so you see three knuckles on the top hand.

Having the top hand in this position helps keep the angle of the club from turning open at impact thus avoid the push!

In the golf swing, we have to keep our weight over the golf ball using the rotation of our hips.

If we slide either back or forward during the swing, so does our weight and the low point of the swing can either move too far ahead of the golf ball or too far behind.

What ends up causing a push shot is when the hips slide forward on the downswing to the point where there is no way to square up and cause an open clubface.

Place a club going perpendicular to your target line going right down the outside of your front foot.

Use the club as a guide and try to not slide the hips over that line.

Instead, feel like the front hip is rotating back to make room for the arms to come down naturally at the golf ball!

3) Play the Ball Higher in the Stance

For golfers that play the golf ball in the back of their stance, there might not be enough time in the downswing for your body to close the clubface at impact causing an open clubface and a swing path that is coming from the inside creating the push shot.

Move the golf ball up in the stance at least a golf ball closer towards your front foot. This gives you more time in your swing to close the clubface and swing more along your target line rather than getting caught in the inside.

Take your normal golf stance and take two small steps back, so it feels like you are reaching more at the golf ball.

When in this golf stance, you will change the lie of your club to a more upright position causing the ball to start out more down your target line!

5) Club Comes too Far From the Inside

The last tip to rid yourself of the push shot is to make sure you are taking the club back down your target line.

One of the most common things I witness when watching beginning golfers is that they take the club too far inside their target line when starting their backswing.

What this does is promote one of the following results:

Take a club when practicing and place it just in front of your back toe along your target line.

Now, make swings and make sure that you don’t cross that club during your backswing.

Your front arm should feel a lot more extended and should be going parallel to your target line.

See! The push shot isn’t that bad after all. It’s only a few small changes away from being able to longer, straighter shots!

To learn more about the fundamentals of the golf swing and how to play more consistently out on the course, take a look at my 100% Free Beginners Golf School!