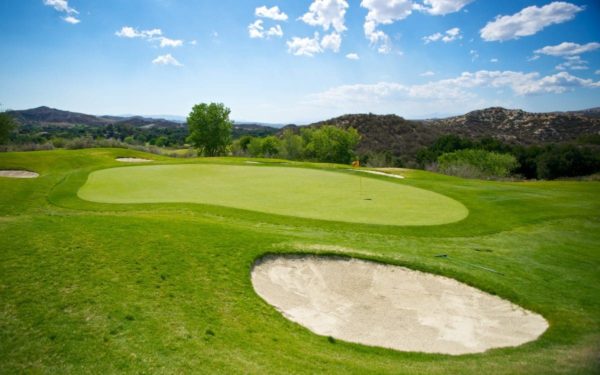 What is a Bunker?

A bunker is an indentation in the ground where golf courses usually place sand. (sometimes grass) They are strategically placed around greens or landing areas in the fairway to force the golfer to hit well-placed shots

Bunkers are defined in the rules of golf as a hazard. This means that you are not allowed to ground your club when addressing the golf ball. Instead, you have to hover the club over or behind the ball before you start your backswing. After you take the club back, you are then allowed to swing down and hit the sand when completing your swing.  It is a two-stroke penalty if you touch the sand before swinging!

Which Club to Use?

When hitting out of fairway bunkers, irons work best to get the ball out of the sand and back in play. It is challenging to hit hybrids or fairway woods when in the sand.

Many greens are guarded by sand to make the hole more challenging to the golfer. If your ball does end up in one of these traps, the primary goal needs to be to get the ball out of the sand and on to the green! But how do we do this? Grab your sand wedge and follow these tips!

2. Play the ball off the front foot

3. Turn the Body to an Open Position

Clubface angle determines what direction the golf ball is going to start. So if we open up the clubface (for a right-handed golfer) and swing normal, the ball would start out to the right of the target. To get the ball start back on the right line, we have to turn the body into an open position to help compensate for the open clubface.

**Closed clubface for a right-handed golfer starts out left of the target line.

The next step when hitting out of greenside bunkers is to dig your feet into the sand. This helps establish firm footing and balance while making the swing.

5. Swing Across the Ball

After taking the club back, we now have the swing down and across the golf ball to add loft and create more spin on the ball. This shot will feel very similar to the flop shot which I talk more about in my article here. Remember, we can’t ground the club when setting up to the ball!

6. Hit Behind the Ball

Quick fact: A greenside bunker shot is the only shot in golf where the golfer hits behind the ball to achieve proper contact. (excluding wet or hard sand, more on this below!)

The most common mistake I see beginners make when hitting out of the sand is that their arms stop after making contact. Those arms have to keep moving “through” the ball! A good drill that works for me to feel the acceleration needed to pop the ball out is to point my chest at the target after the bunker shot. This drill helps the arms follow through the ball and creates enough clubhead speed to get the ball out of the sand. Remember that’s our goal!

Fairway bunkers are very frustrating. One minute you are pumped that you smoked your drive out towards the middle of the fairway. The next, you find out that there is a fairway bunker right where you were aiming and now have to hit out a shot out of the sand. What do you do? The main goal when hitting out a fairway bunker is to get the golf ball into the best position possible and back onto the fairway or putting surface.

Just like the greenside bunker shot, we have to open up the clubface, so the club has a higher chance of sliding under the ball.

Because we are adding loft by opening up the clubface, I have found it best to use a lower lofted club to compensate for the loss of distance. For example: Let’s pretend you are in a fairway bunker and are 100 yards from the flagstick. And let’s say that you usually hit your 7 iron 100 yards. I recommend that you use either a 6 or 5 iron to make up for the loss of distance caused by adding loft to the clubface (opening the club)

**Golf fact– Adding loft to your club makes the trajectory higher and less distance, in case you didn’t know

Just like above, we have to also open up the golf stance to make sure that the golf ball starts out down our target line.

4. Play the ball off of your Front Foot

The more shallow your swing arc on the downswing, the better when hitting out of fairway bunkers. When I say shallow, I mean that your swing is low to ground at impact and not coming down at a steep angle. It might be easier for you to imagine sweeping the golf ball instead of hitting down at the sand. This is the most significant difference between hitting a fairway bunker shot and a greenside bunker shot. We don’t want to hit behind the golf ball in this scenario, or else we lose considerable distance!

5. Keep the Hands over the Golf Ball

To help increase the chances of making solid contact, make sure that the hands are right over top of the golf ball and not pressed ahead. Hands that are pressed too far ahead of the ball causes a steep angle of attack and will cause you to hit too much sand when making contact.

Just listen to Phil below!

The last step is to take a full swing at the ball and again, follow through the shot pointing your chest at the target. For a closer look at the full swing, take a look at my article here.

Unfortunately, the sand isn’t always the same when playing at different courses. Maybe it rained the day before, and the sand is hard and wet. Or maybe the course hasn’t changed the sand in several years causing it to be rock hard. Regardless of the situation, we have to be prepared and capable of hitting different out of these various textures of sand.

I will be honest; I used to struggle when hitting out of the harder sand. The reason why was that I kept thinking that I need to up the clubface and I was never getting consistent contact. That all changed when I talked to my friend (who is also a golf pro) who told me the following tips which changed my results!

1. Play the Ball in the Middle of Your Feet

Contradictory to what I told you above, when playing in harder sand, it is better to play the ball in the middle of your feet rather than off of your front foot. The reason this position is because it avoids having the club bounce off of the hard ground. Playing off the front foot in hard sand can cause the club to jump off the hard ground and then hit the top of the ball causing it to shoot across the green. We don’t want that!

2. Don’t Open the Clubface too Much

If the sand is hard, keep the clubface at a standard, resting position before you start the swing. There is no need to open the face because again, an open clubface increases the chance of the club skipping off the ground and hitting the top part of the ball.

3. Hit Underneath the Ball

The last piece of advice I can give for hitting out of hard sand is to try and hit right underneath the ball. Unlike the greenside bunker shot, where you hit behind the ball, this particular golf shot requires you to hit right underneath the ball. So if you followed the other two steps of playing the ball in the middle of your feet and keeping the loft of the club at a resting position, the swing will become steeper on the downswing and pop that ball out of the hard sand!

I wanted to mention briefly what you are allowed to do according to the rules of golf when in a bunker. Even after reading all of my tips, you may decide that hitting out of the sand isn’t the best option. To avoid hitting from the bunker, you are allowed to go back and replay your last shot taking one stroke penalty. You are also allowed to move your ball, under one penalty stroke, 2 club lengths no closer to the hole. (The ball must stay in the bunker).

If the bunker is full of water, you are allowed a free drop to the nearest point of relief one club length no closer to the hole (Ball must stay in the sand). You can also elect to take the ball out of the wet sand under one-stroke penalty and play outside of the bunker keeping the same line from your golf ball to the hole.

When hitting out of either a greenside bunker or fairway bunker it is best to do the following:

I know that by following these tips, you will feel more confident in the sand and start to see your scores start to drop around the putting surface! If you want more information on how to improve your game, check out my 100% free golf school here!